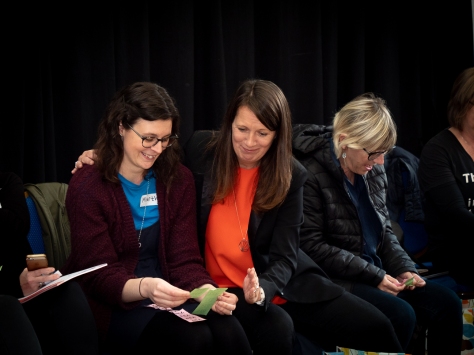 I work in housing. I’m six months pregnant. And I’ve just been promoted.

Shocked? You shouldn’t be. But it’s been interesting to see how many people are. When I’ve mentioned this to friends and colleagues they’ve had a variety of responses:

The resounding sentiment is that this is still an unusual state of affairs, even in the era of #MeToo. I should be surprised at the reactions. But I’m not.

I’ve heard shocking stories from my housing industry comms colleagues. Of senior leaders routinely using sexist language in the office, of females being humiliated and then told ‘calm down love, we didn’t ask you to take your clothes off’, and of a male CEO repeatedly talking to young female colleagues about his previous sexual conquests.

Sound like scenes from Mad Men, don’t they? A show, let’s not forget, set 60 years ago.

I consider myself very fortunate to have a (male) feminist boss. He wears this on his sleeve, as he should. My pregnancy was a complete non-issue when applying for the job.

In fact, the only time it was brought up was when he checked if there was anything additional he could do to support me – or minimise the stress of the interview process.

And even before I started with the organisation, I know he robustly challenged a retiring male boss who questioned the wisdom of employing a recently married woman in her thirties. “She’ll only get pregnant you know”, this individual said. “Good. I hope she does, if that’s what she wants”, my boss replied.

The housing industry, and the PR industry, has a lot to learn from this. An approach that should be normal, not one I should feel ‘fortunate’ to have encountered.

We all know that communications is dominated by females; we make up 64% of employees according to the PRCA.

The gender pay gap in our industry is 21%. That’s 2.6 percent higher than the already appalling UK gender pay gap, which ranks 25th out of 30 in Europe.

And while there are fantastic female leaders out there, the top tier of our profession is still dominated by men.

But what can we do about this? Well, we all need to take responsibility for developing talent – and our male leaders need to particularly take this on board.

Things like CommsCamp, which I recently attended, help. The format of this means everyone has a platform to seek advice, learn from others and be cheered on by colleagues across comms.

It’s not just the top tier on panels. In fact, there aren’t any panels, making it more egalitarian. Anyone can pitch a session – and I ran one on ‘what makes a great head of comms?’.

It was great to gather wisdom and insight ahead of my interview – and a number of senior men (and women) went out of their way to congratulate me when I got the job.

And it felt appropriate that my session was followed by one on imposter syndrome. There were plenty of men there, indicating that while men may be more frequently represented in the ‘dominant coalition’ of organisations they are also, like many women, not terribly comfortable with it!

People regardless of gender in comms are generally seen as good listeners, empathetic and, from my experience, the first port of call when senior folk are seeking advice. I guess this is obvious really. After all, we’re all used to focusing on audiences, gathering insight, listening to concerns, honing key messages and responding to nuance.

And if this is true surely the men amongst our ranks who are already at the top table of organisation, are some of the best to tackle the problem of workplace sexism, ingrained attitudes and plateauing progression for women.

I recently read an article in the New York Times that talked about (and challenged) the common view that women need to be pushier and ‘lean in’ to salary increases and promotions. Essentially, we need to improve ourselves; be more like men.

No we shouldn’t. Don’t make this our problem. Make it yours.

I’m glad I have a boss who recognises this and is doing something about it. How are you going to follow his lead?

Rosemary Davenport is Head of Communications at Homes England

One thought on “commscampnorth: public relations, pregnancy and promotion”